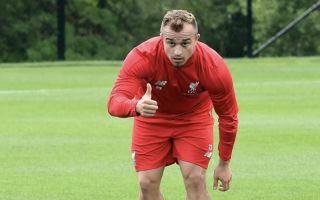 Xherdan Shaqiri has addressed his critics during his time in England, believing that he has ‘proved’ he is good enough to play in the Premier League.

The Swiss international winger joined Liverpool this summer for £13 million from Stoke City – as reported by The Telegraph – on a deal which will keep him at Anfield until 2023.

SEE ALSO: Jurgen Klopp could opt to cash in on £15m Liverpool star as interest builds

During his last season with The Potters, the 26-year-old scored six goals and contributed eight assists and stood out regularly despite being ultimately unable to save the club from relegation.

According to BT Sport, his consistency was called into question by several top pundits including Gary Neville and his brother Phil, both former England and Manchester United defenders.

BT Sport has reported Shaqiri’s response to that criticism in a new interview, during which he said: “They were Man United players – maybe they don’t like Liverpool. I don’t know, it could be.

“Some people like you, some don’t. I’ve played three years in the Premier League. I’ve proved I can play in this league.

“I was the top scorer in the team with goals and assists. For me, my conscience is clear and I don’t have to comment any more on this.”

Before securing his move to Liverpool this summer, the bulky midfielder was in action for Switzerland at The World Cup in Russia and impressed during his country’s run to the last 16 – where they eventually lost 1-0 to Sweden.

Now though, he faces a tough new challenge to prove himself at the highest level by making a positive impact for Jurgen Klopp’s side as they look to compete on various fronts next season.