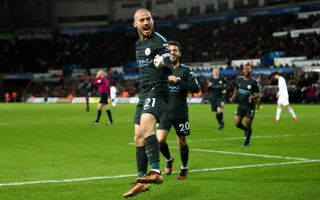 Man City midfielder David Silva has suggested that he could leave the Etihad in search of a new challenge upon the expiration of his contract in 2020.

The Spanish international joined the club back in 2010 and has since gone on to establish himself as a club legend during a trophy-laden spell. He has arguably consistently been one of the best players in England over the last eight years and a key man during City’s three Premier League title-winning campaigns.

SEE ALSO: Manchester City lead chase for £89million transfer after being beaten by Chelsea to Jorginho

However, The Daily Mail reports that the 30-year-old may move on in two years time, citing his age and desire for a new adventure as reasons for leaving but he has insisted that he wouldn’t join a domestic rival of his current club in what will be considered a classy touch for the City faithful.

“When I finish my contract with Manchester City I will be 34 years old, at that time I will probably want to do something different,” Silva said.

“I don’t know yet but I won’t play for another club in England.”

Silva has made 346 appearances for City during his spell in England, scoring 61 goals and contributing a whopping 115 assists. The club will be aiming to secure back to back league titles under Pep Guardiola’s stewardship this coming season for the first time in their history and will begin their season against Arsenal on August 12th.

The veteran playmaker played for Spain this summer at the World Cup finals in Russia but the team exited the competition early in the last 16, at the hand of the tournament hosts.

In turn, he will be hoping to put that disappointment behind him quickly and rediscover his best form ahead of City’s latest campaign, which is likely to involve an assault on all fronts for more silverware.