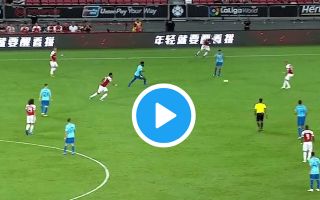 Arsenal were in pre-season action on Thursday against Atletico Madrid in the International Champions Cup, with youngster Emile Smith Rowe making a name for himself.

Unai Emery will be running the rule over his side this summer as he looks to not only implement his preferred style of play but also identify which players will have key roles for him next season.

Further, it’s also an opportunity for the youngsters in the squad to make their mark and ensure that the Spanish tactician closely follows their development moving forward with a view of eventually breaking into the senior side on a permanent basis.

Smith Rowe, 17, certainly did his part to make that happen as he produced a brilliant finish after breaking forward for Arsenal as he cancelled out Luciano Vietto’s opener.

The game went on to penalties, but at this stage of the year, it’s all about improving fitness and chemistry with Emery undoubtedly desperate to get off to a strong start at the Emirates to boost confidence at the club and prove that he’s the right man for the job in the post Arsene Wenger era.

Emile Smith Rowe with a cracking strike to equalise against Atletico Madrid just a minute into the second half. 1-1 pic.twitter.com/cbwilW2Gvc