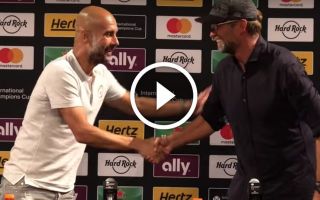 An injury-time penalty sealed the victory for the Reds after Mohamed Salah had earlier cancelled out Leroy Sane’s opener, with Liverpool enjoying a morale-boosting win over the Premier League champions.

It promises to be an intriguing title race this season as with the signings of Alisson, Naby Keita and Fabinho this summer, Liverpool are arguably in a much stronger position to contend and push Pep Guardiola’s men at the top of the table.

The Spanish tactician and his rival Jurgen Klopp came face-to-face after the game too as the latter seemingly walked into the press conference room a little earlier than expected with Guardiola still sat at the top table answering questions.

However, he welcomed the Liverpool boss to take a seat and then made his exit. While there was a hint of sarcasm from both parties as it felt a little bit awkward, it all looked to be in good spirits for the most part with the pair set to clash next season as the new campaign draws ever closer.