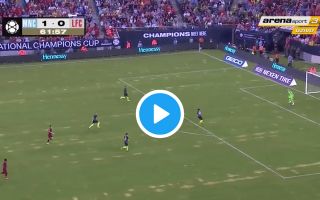 Liverpool ace Mohamed Salah was the talisman for the Reds last season, and he has seemingly picked up from where he left off in pre-season.

Jurgen Klopp’s men took on Manchester City in their International Champions Cup clash on Thursday, and they ultimately prevailed in dramatic fashion.

After Leroy Sane had given City the lead just before the hour mark, Salah struck minutes later to level the scores having only just come on 52 seconds earlier, while the win was wrapped up in injury time courtesy of Sadio Mane’s penalty.

Nevertheless, after his injury nightmare to end last season in the Champions League final and the subsequent struggle to be fully fit for the World Cup, Salah will undoubtedly be delighted to be back in action for Liverpool ahead of the new campaign.

Particularly given that the Merseyside giants have significantly strengthened this summer having officially announced the signings of Alisson, Fabinho and Naby Keita, their win over City was arguably further evidence that they can challenge for major honours.

In order to do that though, they’ll need Salah to repeat his impressive form from last season, and so building his confidence with goals in pre-season will be a crucial part in seeing that happen…