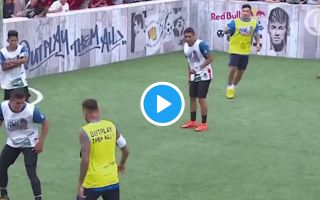 Neymar came under a lot of criticism during the World Cup, now the PSG and Brazil star has attracted more by appearing to barge a teenager in a five-a-side game.

The 25-year-old was expected to be one of the stand-out stars in Russia, but ultimately as he fought fitness issues after a long-term injury, he was never really in peak form.

Coupled with Brazil’s exit in the quarter-finals at the hands of Belgium, it was a disappointing summer for all concerned and it would appear as though some of that frustration is still lingering.

Although he tried to smile and laugh it off after it happened, many have picked up on this incident that took place during a five-a-side game in a tournament in Brazil.

It’s claimed that after repeatedly losing the ball, and on this occasion after he had attempted one too many tricks, he was then seen barging the teenager to the ground before a free-kick was awarded.

Some will argue that it’s making more of a situation than is necessary as he’s just being competitive, but it still seems pretty petty and childish from Neymar especially considering his profile…

Neymar didn’t react well after losing the ball to a teenager in a five-a-side game pic.twitter.com/Y338KI1kPW