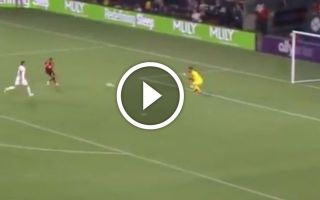 Man Utd were in pre-season action on Thursday as they took on AC Milan and they certainly produced a moment of real class in Los Angeles with this Alexis Sanchez goal.

The Red Devils were looking for a morale boost as the new Premier League campaign continues to edge ever closer, and they certainly got one against Milan.

Sanchez gave United the lead after 12 minutes, but Suso struck just minutes later to cancel his opener out as the game eventually went to penalties with the Red Devils prevailing 9-8 after an epic shootout.

However, one of the highlights of the game was certainly Sanchez’s goal as after a wonderfully weighted and timed assist from Juan Mata, the Chilean international made no mistake as he kept his composure and slotted the ball past Gianluigi Donnarumma.

Expectations will be high for Sanchez this season to improve on what he showed in his first six months at Old Trafford, while the pressure will be on Mata to prove his worth to establish himself in the line-up given the fierce competition for places at Man Utd in the final third.

Nevertheless, both will be pleased with their outing against Milan, while Jose Mourinho will be delighted that his side were able to keep their cool and secure a win in the shootout.

However, this assist and finish will undoubtedly stand out as the best moment in the game…