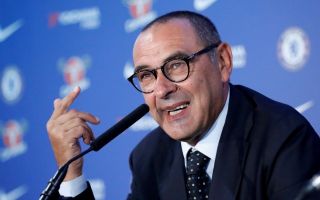 Chelsea are reportedly set to find an agreement over the double signing of Juventus pair Gonzalo Higuain and Daniele Rugani in a deal potentially worth €100m+.

The Blues have been quiet in the summer transfer window thus far, having only officially announced the signings of Jorginho and Rob Green with just two weeks to go until the deadline.

Particularly given their coaching change with Maurizio Sarri coming in to replace Antonio Conte, they will arguably be keen to help their new boss stamp his mark on the squad by signing new players to fit his system and preferred style of play.

That will be seen with Jorginho, a player Sarri knows well from his Napoli stint, but more is arguably needed to give him a better chance of a successful first campaign given his expansive and attacking style differs significantly from that of the more pragmatic Conte.

According to Calciomercato, via the paper edition of Corriere dello Sport, the Italian tactician could be set for a welcome boost as it’s claimed that Chelsea will reach a double deal with Juventus to secure the signings of Higuain and Rugani to bolster their options at either end of the pitch.

As per The Daily Mail, the Blues have previously been linked with making a £53m (€59m) bid for Higuain, while Corriere dello Sport added on Thursday that Rugani could move in a €55m deal, and so it can arguably be expected that it will cost them in excess of €100m to sign the pair.

The signing of Higuain is arguably more important for Chelsea though, particularly considering their struggles in front of goal last season which saw them score just 62 goals in 38 Premier League games, the lowest tally of the top six sides.

Higuain has been prolific throughout his time in Italy, enjoying his most clinical season under Sarri with Napoli with 38 goals in 42 games in the 2015/16 campaign, and so should a deal be done to sign him this summer, it will be welcome boost for the Chelsea boss and the club.