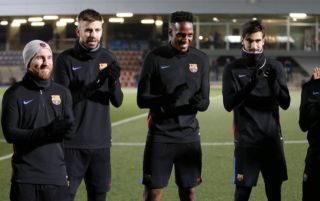 The Red Devils are seemingly intent on bolstering their backline this summer, despite the fact that Jose Mourinho already has Chris Smalling, Phil Jones, Eric Bailly, Victor Lindelof and Marcos Rojo at his disposal.

That would seemingly be enough to compete on various fronts, unless the Portuguese tactician expects one to move on, as speculation continues to link him with a swoop for a defensive star.

As reported by The Mirror, via RMC Sport, Man Utd have been tipped to join the race for Mina, who is said to have been the subject of a €30m bid from Lyon.

The Colombian international impressed at the World Cup in Russia this summer, although he did struggle to adapt and settle in Spain after his January move to Barcelona, which arguably should raise question marks over a potential move to Old Trafford.

Although he boasts physicality, technical quality and aerial strength, if there were obvious signs of struggles to adapt to Spanish football, that could suggest his transition to English football might be problematic.

Nevertheless, with Sky Sports noting that Maguire could cost United up to £65m this summer, it remains to be seen if a deal can be struck for the towering centre-half, who also enjoyed a positive World Cup and continues to go from strength to strength following his relegation with Hull City.

Given his experience in the Premier League, Maguire is arguably the more sensible option and one that offers more immediate assurances United desperate to win trophies next season. However, at double the price as per the reports above, Mina could be a wise alternative solution assuming that Barcelona are willing to sell.

Given Ernesto Valverde saw his defensive options strengthened with the arrival of Clement Lenglet earlier this month, that could convince the Catalan giants to listen to offers for the Colombian.