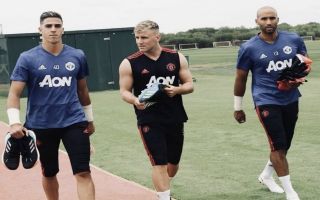 Manchester United defender Luke Shaw has spoken out following negative comments on his weight and insisted that such press only makes him more determined.

The 23-year-old joined the club back in 2014 from Southampton but has since gone on to make just 43 first-team appearances.

A mixture of serious injuries and a turbulent relationship with manager Jose Mourinho, as noted by BBC Sport, has stifled his progress but with fellow left-back Ashley Young now in the twilight of his career at 33, Shaw must now step up to the fore.

According to Talk Sport, the England international was the subject of online trolling following a holiday picture earlier in the summer, which has only added fuel to the fire surrounding his well-documented issues with fitness.

However, during United’s pre-season tour of the US, Shaw has been out to prove he is ready to play a prominent role for the team and posted an Instagram photo a couple of weeks ago which showed him in prime condition.

The Manchester Evening News reports that the youngster has now responded to the negativity which has followed him around in the media the last few years and stated his desire to prove the doubters wrong.

“People think because of the way that I’m naturally built I’m bigger than I am. Of course, people can say that I’m fat but I know my own body,” said Shaw. “Of course I always look big because I’m bigger built and I’m sort of that, you could say, a Wayne Rooney type of body.

“But of course I worked hard and not just for them [the critics], but I wanted to for myself get in the best shape and that wasn’t my best shape.

“It was a good shape to start the season off the pre-season, but now I’m working harder than ever and first game of the season I want to look 10 times better than what I did in that picture.”

The defender is certainly making good on that promise to himself so far this summer and if he continues to work this hard Jose Mourinho will surely be forced to include him in his plans for the new Premier League season.