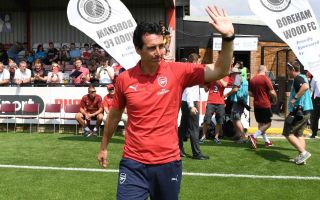 Dimitar Berbatov has expressed his belief that new Arsenal boss Unai Emery will return the club to its former glory, citing his time at PSG as cause for optimism.

Emery spent two years with PSG during a trophy-laden spell with the club but was ultimately let go after failing to match his domestic exploits with success on the European stage.

He has now taken the hot seat at the Emirates with the Gunners, succeeding Arsene Wenger following the Frenchman’s resignation after 22 years at the helm. Wenger’s legacy was secured in his early years in north London as he led the club to three Premier League titles and an unbeaten season whilst revolutionising English football with his trademark passing style.

However, the second half of his tenure proved far more difficult, overseeing a ten-year spell without a trophy before winning three FA Cups during in his last few years as manager.

Former Premier League striker and Bulgarian international Dimitar Berbatov who enjoyed memorable spells with Tottenham and Man Utd, is certain that the new boss is capable of bringing back the glory days at the club, as The Evening Standard reports.

“He’s the right man for Arsenal to bring them to more success,” said Berbatov.

“I watched a lot of games when he was in charge of PSG and I liked the way his team was playing the ball around the pitch from the back with the keepers, through the defenders, midfielders and attackers.

“They always controlled the game and the ball was moving on the pitch not in the air and I think what he’s going to do with Arsenal.”
Arsenal kick off their 2018/19 Premier League campaign on August 12th, where Emery will face a baptism of fire against last year’s champions Manchester City.
More Stories Arsene Wenger Dimitar Berbatov Unai Emery