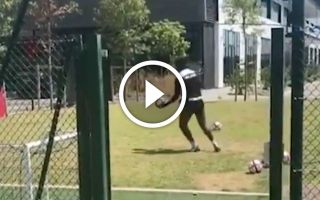 Mario Balotelli has made the headlines throughout his career for both good and bad reasons, but this definitely falls into the former bracket.

The Italian forward is currently enjoying his spell with Nice as he prepares for the new Ligue 1 campaign, but he’s taken a break from training to pull off an epic trick shot.

As seen in the video below, Balotelli manages to volley the ball with enough height and backspin to go over the fence before gradually making its way backwards as it then nestles into the back of the net.

Immediately after pulling it off, albeit we don’t know how many times he tried it, the 27-year-old looks to the camera and issues the challenge to Marcelo to follow suit.

Time will tell if the Brazil and Real Madrid star will accept, but as seen earlier this summer when he replicated his son’s dressing room headers challenge, it’s unlikely he’s going to turn it down! Now we just have to wait until he gets back from his post-World Cup holiday…