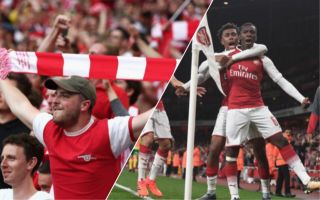 A few certain Arsenal fans took to Twitter this afternoon to hype up Gunners youngster Eddie Nketiah following his fine strike against PSG which helped the north London side secure a 5-1 win.

The Nigerian starlet first made his name known at the Emirates last season when he scored both goals in his side’s 2-1 win against Norwich in the League Cup.

Nketiah impressed Arsenal fans that night at the Emirates, and he looks to have done so again judging by their reaction to his goal against PSG this afternoon.

The 19-year-old scored his side’s fifth in their 5-1 rout against the French champions to give Arsenal the first win of their International Champions Cup campaign this pre-season.

After his goal, a whole host of Gunners supporters took to social media to wax lyrical about the midfielder, with one fan even claiming that Nketiah is better than PSG and France superstar Kylian Mbappe.

Here’s a few select tweets from a number of Arsenal fans who have been heaping praise on and hyping up Nketiah following his goal, and performance, this afternoon.

He may not be better than Mbappe, but we can assure you he’s definitely one for the future.

I have belief in this guy

Eddie can become our wildcard

Love this guy. Really hope he is here long term