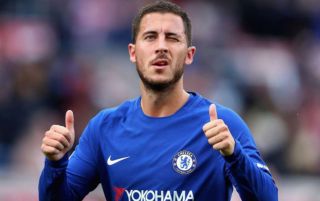 Chelsea have reportedly received good news in their bid to keep Eden Hazard, while they may need to spend £45m to sign Juventus defender Daniele Rugani.

Hazard has established himself as an influential figure for the Blues since arriving in 2012, with his creativity and eye for goal crucial factors in the final third which has helped result in Premier League titles, an FA Cup triumph and a Europa League trophy.

With that in mind, new Chelsea boss Maurizio Sarri will be desperate to have him at his disposal in his first season in charge at Stamford Bridge, and the Italian tactician may well have received a significant boost.

According to AS, Hazard will not be targeted by Real Madrid this summer as a move has been ruled out with new Los Blancos boss Julen Lopetegui tipped to hand Isco a pivotal role as the Spanish giants deal with life after Cristiano Ronaldo.

In turn, that could turn out to be music to the ears of Chelsea as they may not face a battle to keep hold of their Belgian star in the last weeks of the summer transfer window.

Meanwhile, in terms of reinforcements for Sarri, The Sun claim that Chelsea will need to part with £45m if they wish to prise Daniele Rugani away from Juventus, although it’s also suggested that the Turin giants aren’t keen on the idea of losing the talented 23-year-old.

Sarri knows the Italian centre-half well having worked with him at Empoli previously, and although his progress continues to be stunted slightly due to the fierce competition for places at Juve, a move to Chelsea would also see him face a battle to establish himself in the line-up.

The Premier League giants have Gary Cahill, David Luiz, Antonio Rudiger and Cesar Azpilicueta to juggle already, but perhaps with Sarri looking to stamp his mark on the squad and bring in players that fit his ideas and style, Rugani would have a better chance of landing a prominent role at Stamford Bridge.

Nevertheless, it remains to be seen if Juventus can be convinced to sell, as Calciomercato report that Leonardo Bonucci could be in line for a return to the club from AC Milan.