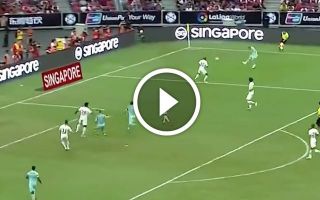 After scoring a stunning goal for Arsenal in their previous game against Atletico Madrid, youngster Emile Smith Rowe made another decisive impact against PSG on Saturday.

With the Gunners squad all looking to impress new boss Unai Emery this summer in order to ensure that they feature heavily in his plans for the new season, Smith Rowe is certainly staking his claim.

The 18-year-old produced a wonderful finish against Atleti last time out to get himself on the scoresheet, but this time round against PSG, he turned provider as he whipped in an excellent cross which Alexandre Lacazette finished off to restore Arsenal’s lead, as seen in the video below.

Given he had only just come on a minute earlier, Smith Rowe wasted no time in making his mark on the game and Emery will surely be impressed with his impact in the last two outings as he has had a decisive say in both games.

Naturally, the big test will be whether or not he can take that to senior level in competitive games, but there’s an argument to be made that he has made a big enough impression this summer to potentially keep himself in Emery’s thinking in the months ahead.

Lacazette restores the lead for Arsenal, 2-1. Emile Smith Rowe with the assist just a minute after coming on pic.twitter.com/hdovIYIvpp