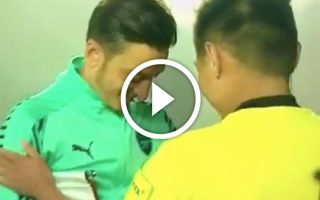 Mesut Ozil was handed the Arsenal captaincy for their International Champions Cup clash with PSG on Saturday, and he found himself in a rather bizarre situation before kick-off.

The German playmaker is back in action for the Gunners after his World Cup exploits, as he looks to get back to full fitness and play a fundamental role in Unai Emery’s plans this season.

Evidently, by opting to name him as captain, Ozil will be important for the Spanish tactician, but he may not experience this again after a strange request from the referee ahead of the encounter with PSG.

As seen in the video below accompanied by an image, Ozil is seen to be asked to sign the referee’s yellow card as he lets out a wry smile while fulfilling his request.

Hector Bellerin has a nosey little peek to see what is happening, and while it is admittedly a little bizarre, it’s a nice gesture from Ozil as the referee will seemingly now treasure that memento.

The Arsenal captain’s day got even better after taking to the pitch, as he opened the scoring after just 12 minutes against the French giants.

The referee has Mesut Ozil signing his yellow card ? pic.twitter.com/stDMI6qvWV