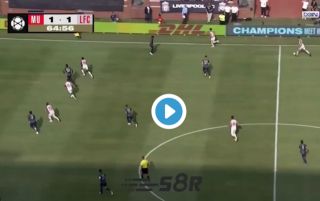 Daniel Sturridge bagged a great finish against Man United for Liverpool this evening to put the Reds 2-1 up against their fierce rivals in their pre-season clash.

The goal, which was very well taken by the England international, was all down to Xherdan Shaqiri, whose persistence and unselfishness was the reason Sturridge was allowed to slot the ball home.

Shaqiri, who joined the club from Stoke this summer, will surely be getting Liverpool fans excited by his arrival, especially if his assist here is anything to go by.

Here’s a clip of Sturridge’s great finish against Mourinho’s men this evening. That hold up play from Shaqiri. Just wow!