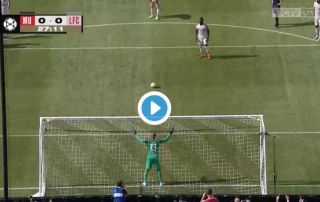 Sadio Mane gave Liverpool the lead in their pre-season clash against fierce rivals Man United this evening thanks to a fine strike from the penalty spot.

The Senegalese international put Jurgen Klopp’s side 1-0 up in the 28th minute after he calmly buried his spot kick past Grant in the United goal.

Liverpool fans will absolutely love this as, despite it being just a friendly, it always feels nice to get one over the Red Devils.

Here’s a clip of Mane’s great penalty against United this evening. With technique like that, we may just see him take over duties for the Reds next season…