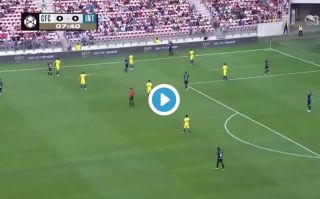 Pedro scored an easy tap-in for Chelsea in their pre-season clash against Inter Milan this evening, with the Spaniard having teammate Alvaro Morata to thank for his hard work in the build-up the goal.

The former Barcelona star was given an easy chance to open the scoring in the match in the eighth minute, and it was one he certainly didn’t baulk at.

MORE: What Maurizio Sarri could be about to do to help convince key Chelsea star to turn down Real Madrid switch

The goal came thanks to the hard work from Morata in the build-up, as the forward pressured the Inter defence before turning them inside and out as he saw his effort saved.

Pedrd was then allowed to tap home to give Chelsea a great start to their International Champions Cup affair.

Here’s a clip of Pedro’s strike, and the tiresome effort from Morata that the Spaniard has him to thank for.