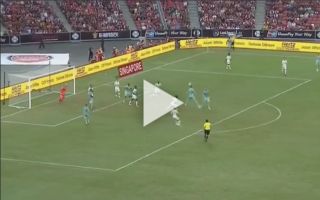 Rob Holding got his name on the scoresheet against PSG this afternoon, as the Englishman’s fine looping header gave the north London side a 4-1 lead against the French champions.

The header, which was from a solid 15 yards out, gave the PSG goalkeeper no chance, whilst also giving the Gunners a lead that ended up proving to be unassailable.

The goal, which was Holding’s first in pre-season, was most likely the best of the match, with the rest of the Gunners’ strikes not coming close to the quality of the defender’s header.

Could Holding’s performances in pre-season manage to convince Unai Emery that he deserves his chance in the Arsenal starting XI this year? Only time will tell.

Here’s a clip of Holding fine header this afternoon, one that we’re sure the player himself won’t be forgetting about for a little while.

Wow!!!!! What a goal from Rob Holding. Top corner header. No chance for PSG goalkeeper as #thegunners make it 4:1