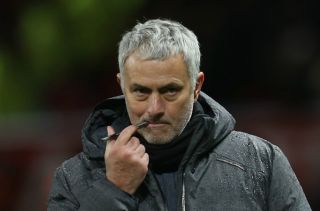 Man Utd continue to be linked with strengthening their defence this summer, but Jose Mourinho reportedly has a questionable alternative plan if no new faces arrive.

The Red Devils have officially unveiled Fred, Diogo Dalot and Lee Grant as summer signings thus far, with just two weeks to go until the deadline.

As noted by The Express, Mourinho is said to be far from impressed that he hasn’t introduced more new faces to the squad this summer, while it’s specifically noted that a central defender is reportedly at the top of his priority list.

That in itself is arguably questionable as the Portuguese tactician already has Eric Bailly, Phil Jones, Chris Smalling, Victor Lindelof and Marcos Rojo at his disposal to fill those positions.

Nevertheless, it’s now claimed by the Metro that he’s even considering more drastic action by using Nemanja Matic at the back, should Man Utd fail to land either Toby Alderweireld or Harry Maguire who are both said to be valued at £75m.

That would surely be a headache for Mourinho though to have to move Matic deeper, as the Serbian international currently plays a key role for United in midfield and will arguably be crucial alongside Fred and Paul Pogba next season.

It seems as though the Premier League giants have enough quality and competition for places as it is without adding another name to the list, and even if they aren’t able to land a desired signing, changing Matic’s position and role seems like a questionable decision from the Man Utd boss if he does indeed go through with it.

However, having finished 19 points behind champions Man City last year and ending up trophy less, Mourinho’s reported frustration, as per the Express, is understandable to an extent as United perhaps need to do much more in the market in order to close the gap on their rivals.