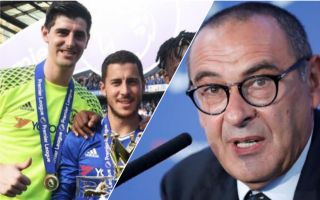 Maurizio Sarri could be set to name Eden Hazard as the new Chelsea captain in order to try and convince him to stay at the club this summer.

This is according to the Daily Mail, who note that the Belgian is a target for Real Madrid, and that Sarri has made a shortlist of Cesar Azpilicueta, Cesc Fabregas and Hazard for his captaincy pick for this season.

The same report also states that by naming Hazard as the new Blues captain, it could help persuade the player to stay in west London and not secure a move to the Santiago Bernabeu.

Losing Hazard would be a huge blow for Sarri’s side, as the Belgian international has proven to be one of the club’s best players these past few seasons.

The former Lille star was crucial for the Blues in both their 2014/15 and 2016/17 Premier League title-winning campaigns.

Naming Hazard as captain would put a huge weight on the player’s shoulders, one that we’re sure he’d be able to deal with given his displays with Belgium at the World Cup this summer.

The winger, who is captain for the Red Devils, was often tasked with dragging his side through the dirt when they needed him the most.

Hazard’s performances went a long way to helping his side secure a third-place finish at the tournament, their best ever finish in the competition.

Chelsea should do anything they can do to keep Hazard, so naming him captain should be an absolute no-brainer for Sarri and Co.