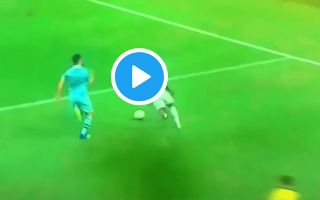 Arsenal defender Sead Kolasinac will be eager to make a positive impression on new boss Unai Emery in pre-season, but it didn’t go quite to plan against Paris Saint-Germain.

The 25-year-old will face competition from Nacho Monreal and perhaps Ainsley Maitland-Niles, who was deployed on the left side by Arsene Wenger at times last season, for a starting berth this year.

Of course, Emery may have his own ideas and plans for the line-up, but Kolasinac didn’t cover himself in glory in the International Champions Cup game against PSG on Saturday.

As seen in the video below, he was beaten for pace by Timothy Weah, who looked a real threat throughout the game, before tripping him in the box to give the referee no option but to point to the spot.

Christopher Nkunku made no mistake as he drew PSG level with his penalty, but as seen in the tweets below, the focus for some Arsenal fans was centred around Kolasinac’s contribution to the equaliser and question marks were raised over his ongoing presence in the line-up.

With Monreal set to turn 33 next year while Maitland-Niles is not a natural left-back, it opens up an opportunity for Kolasinac to really make his mark under Emery and establish himself as the long-term option in that department.

However, while he may be an attacking threat and has an excellent left foot, he surely has to do better defensively than this if he is to make the position his own for Arsenal moving forward.

These Arsenal fans seemingly have their doubts over him…

PSG tie it in #Singapore after #nkunku penalty

Woeful defending by Kolasinac but boy does Weah look dangerous.

Awful decision by Kolasinac to dive in there. Very poor.

PSG score from the penalty spot. 1-1. Poor from Kolasinac there.

Maitland Niles should be above Kolasinac in the pecking order for left back.

People underestimate how shit Kolasinac is

Kola has been low key dreadful