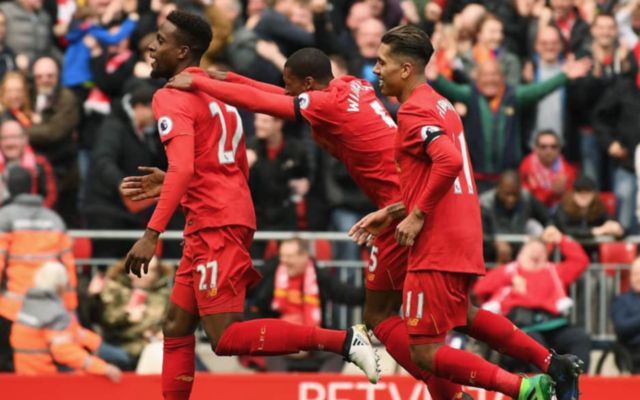 Liverpool reportedly value forward Divock Origi at £26m and are open to allowing the Belgian forward to leave Anfield this summer permanently.

The 23-year-old joined the Reds in 2015, but after making 76 appearances in his first two seasons on Merseyside, scoring 21 goals, he spent last season on loan with Wolfsburg.

With the emergence of the dangerous attacking trident formed by Mohamed Salah, Sadio Mane and Roberto Firmino last season, coupled with the fact that Daniel Sturridge has returned from a loan spell of his own, Dominic Solanke is an option as is Xherdan Shaqiri after joining Liverpool this summer, it’s difficult to see where Origi sits in the pecking order.

According to The Mirror, Jurgen Klopp will not stand in the way of an exit as it’s claimed that Origi is available to buy for £26m this summer, although Watford are reportedly eyeing a loan deal for the striker.

In turn, it remains to be seen whether or not a deal can be done. If a permanent exit doesn’t materialise, Klopp could either choose to keep Origi and use him to compete on multiple fronts this coming season or perhaps accept another loan exit if it suits all parties.

Should they receive a £26m offer though, it would seem difficult for Liverpool to turn it down given Origi can be considered expendable. Further, it would help balance the books this summer after the Reds have spent significantly in order to bolster the squad.

As per Sky Sports, Liverpool are said to have spent £67m on Alisson, while BBC Sport note £39m was spent on Fabinho as they look to assemble a squad capable of competing for major honours.

If Origi doesn’t feature in their plans moving forward, collecting £26m for him could be an excellent bit of business and a boost from a financial perspective, but it remains to be seen if any interested parties are willing to pay that much.