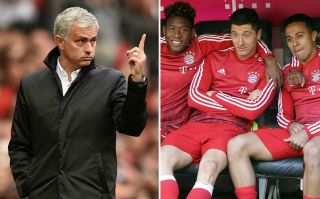 Man Utd have a number of attacking options at Jose Mourinho’s disposal, but Robert Lewandowski has been linked with a move to Old Trafford.

The Portuguese tactician relied heavily on Romelu Lukaku to lead the line for his side last season, and the Belgian international certainly delivered a decent return in his first season with 27 goals in 51 appearances.

The likes of Marcus Rashford and Anthony Martial could also be deployed up front, but as per The Daily Star, Lewandowski continues to be linked with a move to United and Real Madrid, albeit it’s claimed that he could cost over £70m and demand wages on par with Alexis Sanchez which would see him earn around £505,000-a-week.

There’s an obvious case to be made that the 29-year-old would be an excellent addition to the Man Utd squad, given his prolific record in Germany for a number of years during spells with Borussia Dortmund and Bayern Munich.

The Polish international has scored over 40 goals in each of his last three campaigns with the Bavarian giants, while he’s got a career total of 332 goals in 527 outings.

Naturally, those are very impressive numbers and in order to compete on various fronts moving forward, United arguably need a more clinical edge in the final third and Lewandowski could certainly provide that alongside Lukaku.

Nevertheless, that’s a lot of money being reported on both his transfer fee and wages, and considering he turns 30 next month, it has to be questioned as to whether it would be a sensible long-term investment.

Mourinho has seen Lee Grant, Diogo Dalot and Fred arrive at Old Trafford so far this summer. It’s questionable as to whether that’s enough to close the gap to rivals Man City and compete for trophies across the board given they finished 19 points off the pace in the Premier League title race last season and ended up empty-handed after losing in the FA Cup final.