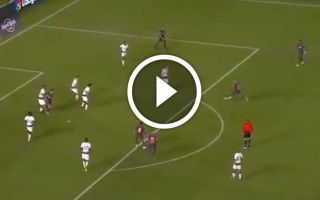 After his summer move to Barcelona, midfield ace Arthur would have been desperate to make an early positive impression. He did just that against Tottenham on Sunday.

As noted by BBC Sport, the Catalan giants splashed out €40m on the 21-year-old, as they evidently have faith in his qualities to emerge as a key figure in their midfield for years to come.

While it will still naturally take time and patience for him to settle at the Nou Camp and display his best football while also developing his game and improving, as far as first impressions go, he made a pretty good one against Tottenham in the International Champions Cup.

As seen in the video below, after receiving the ball on the edge of the box, he took a brilliant first touch and composed himself before letting fly with a superb long-range strike which flew into the back of the net.

Ernesto Valverde will be looking for more of the same moving forward as Arthur could have a key role to play as of this coming season, and with goals like these, he’ll do himself no harm in his bid to immediately establish himself in the Barcelona starting line-up.

After being held to a 2-2 draw, Barcelona eventually prevailed over Spurs 5-3 on penalties. Nevertheless, the moment of the game undoubtedly came courtesy of Barca’s summer signing as Arthur will be delighted with his instant impact.

Arthur makes it 2-0 ..what a goal pic.twitter.com/FXkvWe3qYn