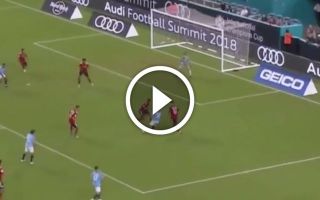 Despite falling 2-0 behind, Man City came roaring back to secure a 3-2 win over Bayern Munich in their International Champions Cup meeting on Sunday.

Goals from Arjen Robben and Meritan Shabani had given the Bundesliga giants a comfortable lead early on, but it wasn’t to last as Pep Guardiola will have been delighted with the response from his team.

A double from Bernardo Silva and a goal from Lukas Nmecha turned things around in the favour of the Premier League champions as they wrapped up their pre-season preparations ahead of the Community Shield clash with Chelsea next Sunday.

The pick of the goals was arguably Silva’s second though, as he produced an excellent finish after some superb Man City team play, as seen in the video below.

It’s the style of football that we come to expect from Guardiola with the quick, intricate passing and movement off the ball to open teams up, and perhaps it could be interpreted as a concern for their rivals that they seem to be clicking into gear so early on in pre-season before the competitive football even gets underway.

Bernardo Silva has found the back of the net again. #FCBMCFC #ICC2018 pic.twitter.com/IlWYAOPToD