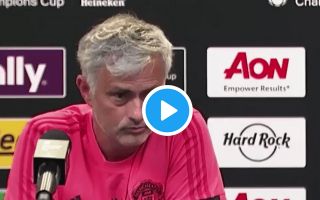 After seeing his side suffer defeat to Liverpool in the International Champions Cup, a dejected Jose Mourinho discussed Man Utd’s potential transfer plans between now and the deadline.

The Red Devils suffered a damaging 4-1 defeat to their bitter rivals, with the difference in moods between the two camps glaringly obvious.

While Jurgen Klopp and the Merseyside giants are undoubtedly feeling hopeful ahead of the new campaign after signing Alisson, Fabinho, Naby Keita and Xherdan Shaqiri this summer, United haven’t particularly impressed in pre-season and it’s debatable as to whether they’ve made the necessary additions to close the gap on Man City this year.

Mourinho has seen Lee Grant, Diogo Dalot and Fred arrive at Old Trafford this summer, and as noted in the video below, the Portuguese tactician has conceded that he believes he’ll likely only see one more signing this summer from a five-man transfer shortlist that he has given to the club.

In truth, he doesn’t sound particularly impressed or confident in the work that has been done to this point, and it remains to be seen whether or not that has a negative impact on their hopes of winning major honours in the upcoming campaign.

The focus for now will be on bouncing back against Real Madrid in their final pre-season outing next Wednesday before returning home to face Leicester City in their opening Premier League game.