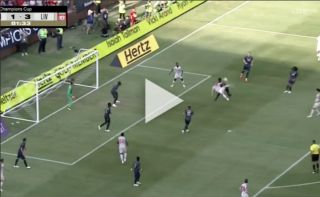 Xherdan Shaqiri bagged a sublime overhead kick for Liverpool this evening to put the Reds 4-1 up against rivals Man United in their pre-season clash.

The Swiss international, who joined the club from Stoke this summer, scored his first goal for Jurgen Klopp’s side in fine fashion as he wrapped up a convincing win for the Merseyside club.

The midfielder bagged what was a sublime overhead kick volley which flew past the United keeper with just eight minutes of normal time to play.

We’re sure this is a goal that neither Shaqiri or Liverpool fans will be wanting to forget in a hurry, especially as it’s against Man United!

Here’s a clip of Shaqiri’s fine strike today. All we can say is: wow!

Oh he can hit one #Shaqiri pic.twitter.com/LVp4wqTWyK

Go ahead Shaqiri lad. Think he will surprise us this season. #LFC #SHAQIRI pic.twitter.com/qpfUMzBUtk

#Shaqiri just did this ????? pic.twitter.com/9TLiXAfn4w