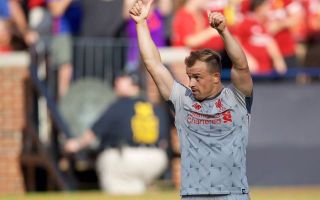 As far as Liverpool debuts go, scoring a bicycle kick in a 4-1 win over Man Utd probably tops the lot as Xherdan Shaqiri enjoyed a memorable first outing for the Reds.

The Swiss international made his Liverpool bow in their pre-season friendly against their bitter rivals in Michigan on Saturday, wrapping up an impressive US tour for the International Champions Cup.

Jurgen Klopp will be hugely optimistic for the season ahead as while Liverpool secured wins over Man City and Man Utd as part of their preparations, he is evidently impressed with what he’s seeing from his summer recruits with Alisson still to come.

Given Shaqiri’s impact though against United after coming on for the second half of the win, the German tactician was more impressed with the former Stoke City star’s ability to adapt and settle in his surroundings and with his teammates in a different role.

“That’s not normal after four days in the club – adapting that well to the style of play,” Klopp is quoted as saying by Sky Sports. “We wanted to help him a little bit with the position so that it’s not too complicated, gave him a lot of freedom, offensively playing natural, plus offering runs in behind, which is what he did.

“It was better than I would have expected, to be honest.

“For Shaq, in the moment he signed he wanted to stay immediately at Liverpool and train with us. I think it was a week after he finished the World Cup, so I said: ‘No, no, no. Go!”

The 26-year-old could prove to be a pivotal addition at Anfield to give Klopp a different dynamic in the final third, as he will look to compliment the attacking trident of Mohamed Salah, Sadio Mane and Roberto Firmino, while also potentially being rotated and playing in a wide role.

In turn, to give himself a huge confidence boost after his arrival at Liverpool, Shaqiri will likely be delighted with the early progress he has made and so it remains to be seen just how influential he can be for the Reds this season as they look to compete on various fronts.