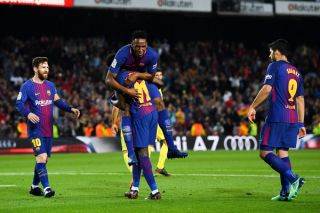 Man Utd boss Jose Mourinho is reportedly intent on bolstering his defence, and Barcelona ace Yerry Mina is said to be one of his summer targets.

The Red Devils are seemingly well equipped in that department, given that the Portuguese tactician can call upon Chris Smalling, Phil Jones, Eric Bailly, Victor Lindelof and Marcos Rojo.

However, it doesn’t seem to be enough as Sport claim that Man Utd have asked €40m target Mina to give them time before accepting a rival offer as they risk falling short in their pursuit of trying to prise €70m-rated Harry Maguire away from Leicester City.

Whether or not Mina is willing to play second fiddle and wait remains to be seen, but with the transfer deadline for English clubs fast approaching, time is undoubtedly running out for the concerned parties to reach the required agreements.

The Colombia international struggled in his first six months with Barcelona as he wasn’t able to force his way into the line-up as he continued to adapt and adjust to La Liga as well as the Barca style of play.

Despite enjoying an impressive outing at the World Cup in Russia, it would appear as though his club situation has worsened this summer after the Catalan giants confirmed the signing of Clement Lenglet to provide more competition for Samuel Umtiti and Gerard Pique.

With that in mind, an exit from Barcelona seems like the best solution for Mina if he prioritises playing regularly and having a prominent role, and Man Utd could potentially be offering that depending on their success with Maguire.

It seems a little harsh that they may not be hiding the fact that Mina is their second choice, but ultimately he’ll have to make the best decision for his career if an offer does indeed arrive from Manchester.

The latest speculation comes a day after Mourinho suggested that he’s hopeful of more summer signing for Man Utd, as per BBC Sport, and so time will tell if it will be Maguire, Mina or perhaps a different target.