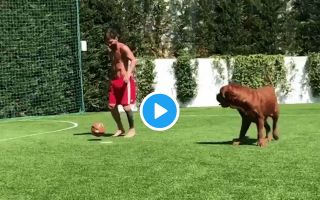 Lionel Messi doesn’t do normal kick-abouts in the garden, as the Barcelona star opts to run circles around his dog instead.

The Argentine international will have spent the summer moving past his World Cup disappointment, as he prepares for a new season with the Catalan giants.

Given the quality that he has consistently shown for years now, there’s few doubts that he will be the talisman for Barca once again, and La Liga defenders will undoubtedly dread going up against him when he’s in top form.

His secret of preparing for the season has been revealed though, as he clearly hones his skills at home with the help of his pet dog, who is absolutely huge and looks about the same size as a defender anyway.

Messi seems to be enjoying himself as he pulls off plenty of flicks and tricks. Bet his dog isn’t appreciating it though…