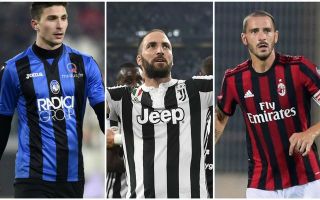 AC Milan and Juventus are reportedly on the verge of concluding an agreement involving Gonzalo Higuain, Leonardo Bonucci and Mattia Caldara swapping clubs.

Having completed the stunning signing of Cristiano Ronaldo earlier this summer, Juve appear to be ready to adopt a ‘win now’ approach.

According to respected Sky Sport Italia journalist Gianluca Di Marzio, they are willing to sacrifice young defensive star Caldara in a swap deal to take Bonucci back to Turin, while Higuain will move to the San Siro in an initial loan deal worth between €18m-20m with an option to buy for €36m.

Further, he adds that a deal could even be completed by Tuesday as talks continue between the respective parties.

The deal undoubtedly suits Milan as they will reportedly receive Caldara in return for Bonucci, which could potentially give them a settled centre-half pairing for years to come with the 24-year-old likely to feature alongside Alessio Romagnoli.

Meanwhile, having scored just 56 goals in 38 Serie A games last season, the lowest tally of the top seven sides, they are now set to bring in a striker in Higuain who has scored 146 goals in 251 games since moving to Italy in 2013.

While it’s arguably a hefty fee for a player who turns 31 in December, provided that he can offer an immediate impact and help Milan return to the Champions League next season, it may well be an important addition with a short-term vision in mind.

As for Juventus, Bonucci could now arrive at a time when confidence and belief is growing at the club that they can finally end their wait for glory in Europe after signing Ronaldo.

The Italian international will offer leadership, experience and solidity at the back, and he won’t need too much time to settle in having been gone for just a year after joining Milan last summer.