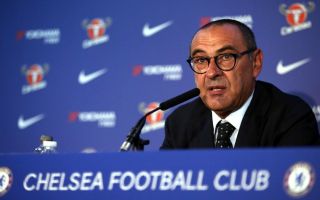 Chelsea boss Maurizio Sarri has reportedly set his sights on Inter ace Matias Vecino, but it will cost the Blues €34m to prise him away from the Italian giants.

The Italian tactician was appointed Blues boss earlier this month, and he wasted little time in strengthening his midfield by securing a reunion with former Napoli star Jorginho.

Sarri has been lauded in recent years for the style of play his sides adopt, as he prefers a more expansive and possession based game along with a high press off the ball which makes for entertaining viewing.

In order to replicate that at Stamford Bridge, he is seemingly eyeing more technical quality and a solid midfield presence with Calciomercato linking them with Vecino, while it’s claimed that if he is to leave Inter, they will demand €34m to make a decent profit on their initial outlay.

With the deadline fast approaching next month, it remains to be seen if a deal is done and if Chelsea move for any other targets, with Sarri tasked with getting them back into the Champions League at a minimum this coming season.

As for Inter, they have the Champions League to consider, and so Luciano Spalletti will be keen to avoid being left short of having enough quality and depth in his squad to compete on multiple fronts across the campaign.

That won’t be Chelsea’s concern though, as they now look to push forward with their next signing to see Vecino potentially deployed in a midfield three alongside Jorginho and N’Golo Kante.