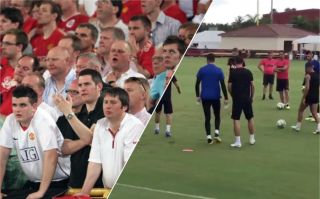 A video of Man United players undergoing a training drill have surfaced online, and some fans aren’t very impressed with what they saw.

The Red Devils have been disappointing in their pre-season tour of the US so far, with the worst match of their preparations for next season coming against Liverpool, with Mourinho’s side suffering a 4-1 defeat against the Reds.

With the club failing to win the Premier League last season, some fans seem to be coming quite inpatient with Mourinho’s side, as they continue to wait for their first league title in 2013.

And after seeing this video, they won’t be feeling very encouraged for the season ahead…

The video, which was posted on social media very recently, shows United players undertaking a training drill called a ‘Rondo’, something they don’t seem to be very good at at all.

The objective of the drill is predominantly teach players how to pass their way out of tight spaces and keep a cool head under pressure, elements that United’s stars look to be struggling with.

Here’s a clip of the video and the fan reaction that has surfaced online because of it.

It’d be pretty safe to say that these fans weren’t very impressed with what they saw, by any means!

Terrible body language from all of them. Attitude clearly reflecting their abilities in this.

That is really really not good

What a load of shit