Barcelona could reportedly sell trio Munir El Haddadi, Aleix Vidal and Paco Alcacer before the end of the transfer window as they seemingly look to trim the squad.

Ernesto Valverde is coming off the back of a campaign in which he led the Catalan giants to a domestic double, and so they will undoubtedly be eager to build on that success.

While they lost Andres Iniesta and Paulinho this summer, they gained Clement Lenglet, Arthur and Malcom, and so it remains to be seen whether or not there is more business to be done at the Nou Camp before the season gets underway next month.

According to Mundo Deportivo, a €10m exit for Aleix Vidal is expected shortly, while Sport note that Munir could soon join him at Sevilla if he green lights a switch as Paco Alcacer is also up for sale as Barca seemingly look to cut down on the attacking players at the Nou Camp.

It would seem to make sense given Valverde will have Lionel Messi, Luis Suarez, Philippe Coutinho, Ousmane Dembele and now Malcom at his disposal in that department, and so even if Munir and Alcacer were to stay, it’s difficult to see how they would play regularly enough to be content.

On paper, it seems like a sensible transfer strategy, which may perhaps even add funds to the kitty to go out and sign another target before the deadline.

However, Valverde will also need to be careful not to cut too much depth from his squad, as he will be looking to compete on various fronts next season and will need to rotate and rest star players.

The Spanish tactician was regularly criticised by supporters on social media for not resting key individuals enough last season, and so by reducing his numbers, there could be a repeat of that this year.

Video: Manuel Neuer’s lucky escape for Bayern vs Dortmund after he charges off his line August 3, 2019 20:28
Bayern Munich 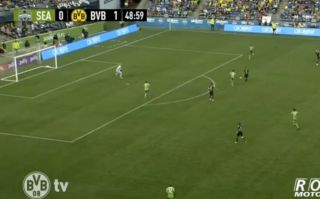