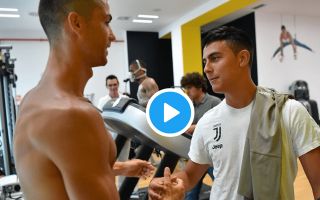 Cristiano Ronaldo attended his first day of pre-season on Monday, albeit with a different look following his €100m+ move to Juventus this summer.

As per the club’s official statement, they prised the Portuguese superstar away from Real Madrid earlier this month in a deal that will cost them in excess of €100m.

Nevertheless, given the expected impact that the 33-year-old will have on and off the pitch in terms of revenue boosts and the possibility of not only extending Juve’s domestic dominance but also helping to end their wait for the Champions League, it is undoubtedly the transfer of the summer.

While most of the Juventus squad are currently on the US tour for pre-season, many of their World Cup stars returned to Turin this week to start pre-season training which began with medical tests on Monday.

As seen in the video below, Ronaldo was joined by the likes of Douglas Costa, Gonzalo Higuain, Paulo Dybala and Juan Cuadrado at the club’s medical base, and it would have been the first time that many of them had met since Ronaldo’s move to join the Serie A champions was completed.

Juve’s star men will be itching to get out on the pitch to link up with Ronaldo this season, but for now the focus is on regaining full fitness ahead of the new campaign as the former Madrid talisman looks pleased with his welcome…