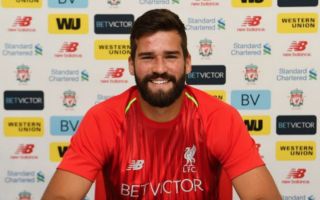 Liverpool welcomed a new face to pre-season training on Tuesday as summer signing Alisson joined up with his teammates as preparations continue.

As noted by Sky Sports, the Reds signed the Brazilian international from Roma in a deal worth £67m earlier this month as he looks set to become their new first-choice goalkeeper ahead of Loris Karius.

Given the German shot-stopper has endured a horror show in the last few months from his blunders in the Champions League final to his pre-season mistakes, it’s no surprise that Liverpool opted to move for Alisson who proved to be a world-class operator for Roma last year and has established himself as Brazil’s No.1 too.

In turn, Liverpool fans will hope that he’s another piece added to the puzzle to help the club compete for major honours consistently moving forward, and he looked like he’s certainly up for the challenge as he was put through his paces in his first training session, as seen in the videos below.

It remains to be seen when Alisson makes his Reds debut as Jurgen Klopp’s side take on Napoli on Saturday before facing Torino next week in their last two pre-season friendlies.

That’s all in the build-up to their Premier League opener, which will see them host West Ham United at Anfield on August 12.

Roberto Firmino and @Alissonbecker have joined us in training! ???#LFC #YNWA