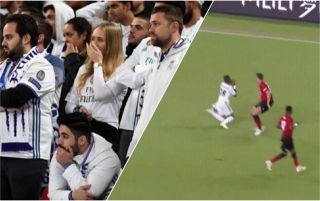 Vinicius Jr is surely going to be one of the stars of the future, with his move to Real Madrid showing just what the Spanish giants see in the winger.

The Brazilian starlet played against Man United in Los Blancos’ first match of pre-season, and he did something that caught a lot of fans’ eyes for all the wrong reasons.

During the match, 18-year-old produced a dive that even a young Didier Drogba would’ve been proud of, and it certainly hasn’t impressed these few fans.

It’s not a nice thing to see a player dive in a match in any circumstance, especially when they aren’t even anywhere near the penalty area like Vinicius was!

Here’s a clip of the Brazilian wonder-kid’s theatrical acts against the Red Devils on Wednesday morning and the reaction to it.

We’re sure a lot of Real fans will be wanting Vinicius to remove this element from his game, despite it winning their side a free-kick!

Despite the worst dive I've ever witnessed & the potential to be a complete sh*thouse of a player, Vinicius Jr. looks very much the superstar for Real Madrid. Step overs galore in the No. 28 (Ronaldo's 1st number for Sporting) and the perfect replacement for CR7. Great name too.

Just seen a gif of the Vinicius Jr dive. Take a bow son, drinks on me sir, round of applause. Dive was so entertaining I had to play Drake's Best I Ever Had.

Vinicius Jr with the worst dive of all time…

Vinicius diving already though. Needs to cut that out immediately or the Neymar comparisons that you wouldn’t want are gonna come in.