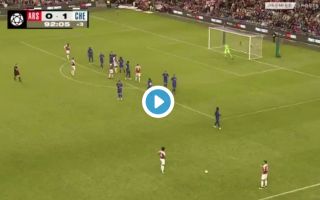 Alexandre Lacazette scored with one of the last kicks of the game this evening to snatch a draw from the jaws of defeat for Arsenal in their clash with Chelsea.

The Frenchman, who scored in the Gunners’ previous pre-season clash against PSG, scored the equaliser in added time against the Blues when the north London looked as good as defeated.

The goal now means that penalties will be used to decide who takes the points home in this affair, and after last season’s Community Shield, we feel the Gunners may be a little confident about their chances here.

Here’s a clip of Lacazette’s easy finish against the Blues. Right place at the right time; what more can we say?