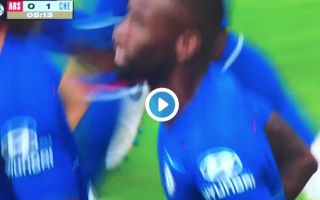 Chelsea had Antonio Rudiger to thank this evening, as the German international’s header gave the Blues a 1-0 lead in their pre-season clash against London rivals Arsenal.

The goal, which came after just five minutes, is one that the Gunners will be disappointed in conceding give how easy the defender was allowed his effort on goal.

The goal now means that the north London side are going to have it all to do if they are to avoid defeat to their Premier League rivals in this pre-season clash.

We’re sure Arsenal fans won’t want to lose this one, even if it is just a meaningless game!

Here’s a clip of Rudiger’s fine header to give Chelsea the lead against Arsenal. Absolutely unstoppable from the German.