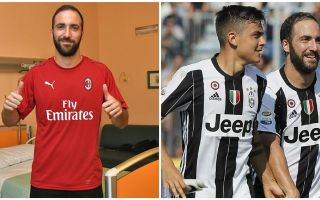 Ahead of an official announcement confirming his move to AC Milan after undergoing his medical on Thursday, Gonzalo Higuain has received messages from his former Juventus teammates.

As noted by Calciomercato, the Argentine forward is part of a three-man deal made between the two Italian giants, with Mattia Caldara joining him at the San Siro while Leonardo Bonucci returns to Turin.

The 30-year-old made a crucial impact after joining the Bianconeri from Napoli in 2016, scoring 55 goals in 105 games for the club which helped them extend their domestic dominance with two Serie A titles and two Coppa Italia trophies during his stint at the club.

However, he’ll now prepare for his new challenge with Milan, and based on the messages left on Instagram from some of his former Juventus teammates seen below, they’re certainly going to miss him ahead of the new campaign.

Paulo Dybala, Miralem Pjanic, Alex Sandro and Mehdi Benatia were among those to send out a post, with Dybala noting: “Good luck brother, it was great to share these years of victories, goals and titles!”

Meanwhile, Pjanic added: “Brother, what to say…aside from saying thank you. I’m sorry to see you in another team. We spent two beautiful years together. We had fun, we won what we wanted! I wish you only the best for you and your family for your new adventure! See you soon, my friend. A hug from me and Edin your friend.”

Goals aside, it would appear that Higuain was an important figure in the dressing room based on the reaction to his exit. Nevertheless, having signed Cristiano Ronaldo from Real Madrid this summer, it would appear Juve are in a strong position while Milan have potentially now got the world-class striker that they’ve craved for years.