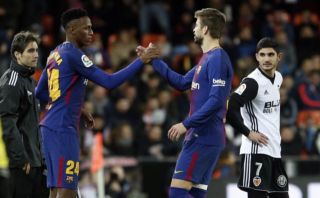 Manchester United are reportedly set to switch their focus to the transfer of Barcelona defender Yerry Mina after struggling to land their other targets this summer.

The 23-year-old struggled for Barca last season but impressed on the international stage with some big performances for Colombia at this summer’s World Cup, scoring three times from the back and proving a real leader for his country in defence.

MORE: Manchester United star may have played last game for club as Arsenal and Chelsea hover for transfer

According to the Daily Mirror, Mina is available for as little as £30million and is now set to be targeted by United after their failed pursuits of Leicester City’s Harry Maguire and Tottenham’s Toby Alderweireld.

The report suggests Maguire is set for talks over a new contract and big pay rise at Leicester, and while Alderweireld may still be available, Tottenham are proving tough negotiators.

Yerry Mina of Barcelona is a transfer target for Manchester United

Mina is perhaps available at a fraction of the cost and seems a decent enough option, with United desperately in need of a new centre-back.

Jose Mourinho surely cannot rely on the likes of Chris Smalling and Phil Jones for too much longer if he is to close the sizeable gap between his side and Manchester City next season.