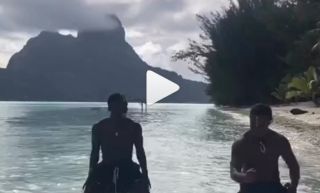 Manchester United midfielder Paul Pogba certainly looks a world away from the difficult realities at his club right now.

The France international is still on holiday after winning the World Cup with his country this summer, and has uploaded a video of himself performing what looks to be a tribal dance in the sea.

In truth, United could do with Pogba back in action soon after a difficult pre-season in which they’ve looked depleted and unconvincing for most of their matches.

Still, that’s not his problem right now as the 25-year-old lives it up and takes the chance to do all the dancing he wants after showing his critics he’s more than just a flashy Instagram footballer with his influential role in France’s World Cup win.