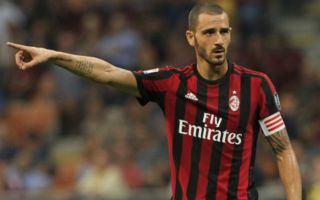 After a year with AC Milan, Leonardo Bonucci is on the verge of seeing his return to Juventus become official having undergone his medical on Thursday.

As noted by Calciomercato, the 31-year-old is set to return to Turin with Mattia Caldara and Gonzalo Higuain moving in the opposite direction as part of a three-man deal.

It’s a deal that certainly suits the Rossoneri given they’ve acquired a long-term replacement to fill the void the left behind by Bonucci with Caldara now expected to forge a crucial partnership with Alessio Romagnoli, while Higuain gives them a world-class striker that they’ve arguably lacked for years.

From a Juventus perspective, they are seemingly adopting a ‘win now’ approach having landed the signing of the summer last month with the acquisition of Cristiano Ronaldo from Real Madrid.

Bonucci will bring leadership, experience and a winning pedigree to the backline to strengthen it further, and so it remains to be seen if the short-term vision from the Turin giants pays off with the Champions League undoubtedly on their radar this season.

However, based on the reaction from some fans in the tweets below, they are not impressed over Bonucci’s return after he opted to leave the Serie A champions last summer.

Evidently, by returning to the Bianconeri, he has mended any broken relationships within the club, but given the reaction that he has received from some fans, it might take some time before he’s back in their good books.

Fuck you Leo & welcome back.

Where is Bonucci? I see a snake ?