Amid speculation of Luka Modric eyeing a move to Inter, Real Madrid president Florentino Perez has all-but ended talk of an exit after issuing a warning over his valuation.

The Croatian midfield ace has established himself as a key cog in the success of the Spanish giants in recent years, and continued to impress at the World Cup earlier this summer.

In turn, it would come as no surprise if rival clubs wished to prise him away from the Bernabeu, but according to La Gazzetta dello Sport, Modric himself was linked with considering a move to join Inter ahead of Luciano Spalletti’s side returning to the Champions League this season.

Having already signed Radja Nainggolan, Lautaro Martinez, Sime Vrsaljko and others this summer to significantly strengthen the group, adding Modric to the equation could arguably turn Inter into genuine contenders both at home and in Europe.

However, Perez has seemingly ended any hope they had of being able to agree a deal for Modric, as he has revealed that it will take a bid of €750m to open up the possibility of an exit, as per Marca.

Given Real Madrid have already lost one talisman in Cristiano Ronaldo this summer along with the disruption of seeing Zinedine Zidane step down with Julen Lopetegui appointed as his successor, there is a lot of change occurring at the Bernabeu and that could rock the ship.

With that in mind, keeping Modric to continue to run the midfield will be key, and based on Perez’s comments, it’s going to take a ridiculous bid to convince the reigning European champions to part company with another of their fundamental players this summer. 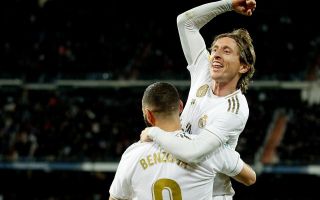