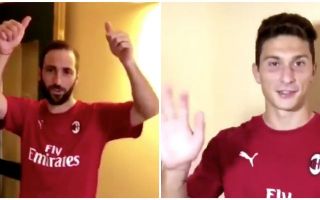 Both Gonzalo Higuain and Mattia Caldara underwent their AC Milan medicals on Thursday morning, and the pair sent their first messages to the Rossoneri faithful.

As reported by Calciomercato, the Italian giants have agreed on a deal which will see the duo arrive from Juventus, with Leonardo Bonucci heading in the opposite direction.

Having landed a long-term defensive pillar to place alongside Alessio Romagnoli coupled with a world-class striker who has scored 146 goals in 251 games since moving to Italy in 2013, there is much to be optimistic about for Milan next season.

Although Gennaro Gattuso is still arguably missing quality depth having fallen short of their objectives last season with a sixth-place finish in Serie A along with a disappointing exit from the Europa League, this move strengthens them as they plan a fresh assault on the top four in the upcoming campaign.

Both Higuain and Caldara looked delighted to be in their new surroundings having arrived in Milan to undergo their medicals, with the latter flying in from Juve’s pre-season tour in the US to complete his move.

An official announcement from the club to confirm the signings has yet to arrive, but they’ve been busy tracking their new boys all day and they had a message for the supporters as they both acknowledged the fans and said a quick hello, as seen in the videos below.