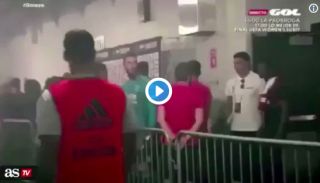 Real Madrid attacking midfielder Marco Asensio is one of the finest young players in Europe – and he’s also an expert troll from the look of this video.

The Spain international aimed a cheeky dig at his fellow countryman David de Gea and also managed to mock Liverpool goalkeeper Loris Karius in doing so – two birds with one stone.

See below as Asensio references De Gea’s poor World Cup performances by chanting ‘Karius’ at him, which in itself is referencing the Reds ace’s shocking performance against Madrid in last season’s Champions League final.

The German made two awful mistakes to gift goals to Karim Benzema and Gareth Bale as Real ran out 3-1 winners in Kiev.

De Gea then notably let a weak Cristiano Ronaldo effort slip through his hands in a similar manner in a 3-3 draw between Spain and Portugal at the World Cup.

Marco Asensio calling David de Gea "Karius" as the players were in the tunnel for the Real Madrid vs Man Utd friendly. pic.twitter.com/4ctVx7jZu7

United went on to beat Los Blancos 2-1 in their friendly match thanks to goals from Alexis Sanchez and Ander Herrera.