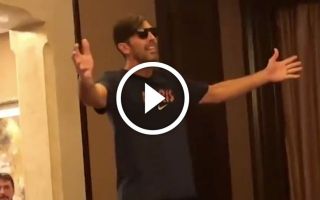 After spending 17 years at Juventus, Gianluigi Buffon is getting used to being the new guy in the squad and with that comes the traditional initiation song!

The 40-year-old will begin a new chapter in his career this season as he looks to help the French giants not only continue their domestic dominance, but also to take the final step needed in the Champions League.

SEE MORE: Champions League giants ‘refusing to give up’ in transfer pursuit of vital Chelsea star

However, before the competitive football gets underway, the Italian icon had to go through his initiation, and based on the reaction from his PSG teammates in the video below, it seems like it went down well.

In truth though, singing doesn’t quite seem to be one of Buffon’s biggest strengths, and so he’ll probably be well advised to stick to goalkeeping and proving to be a key addition to the PSG squad this summer to help them improve under Thomas Tuchel.

It will seem surreal to see Buffon in another jersey having been with Juve for so long, but the veteran shot-stopper now has a new challenge on his hands as he continues to edge ever closer to the end of an illustrious career.