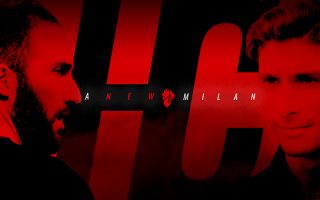 AC Milan and Juventus have officially confirmed Gonzalo Higuain and Mattia Caldara have joined the Rossoneri while Leonardo Bonucci returns to Turin.

The 31-year-old defensive stalwart moves back to Juve just a year after leaving the Serie A champions, who are seemingly adopting a ‘win now’ approach by taking the experienced centre-half back having already signed Cristiano Ronaldo this summer.

The established duo undoubtedly strengthen Juve’s case to continue their domestic dominance, while it remains to be seen whether or not they’re enough to end their wait for European glory too.

In order to secure his return though, Caldara and Higuain have moved in the opposite direction to join Milan, who now have an immediate replacement for last season’s club captain and a potential defensive pillar in Caldara plus a world-class striker who has bagged 146 goals in 251 games since moving to Italy in 2013.

As per the official statement from Juventus, both Bonucci and Caldara have been valued at €35m each which effectively makes that a straight swap deal while Milan will pay €18m for an initial loan deal for Higuain with a €36m option to buy next year.

Further, Milan have wasted no time in revealing the shirt numbers that Higuain and Caldara will take up next season, with the Argentine forward getting the No.9 jersey and the young defender getting the No.33 shirt, as confirmed in the tweet below.

Gennaro Gattuso will now undoubtedly hope that the pair can help make the difference to help Milan take their next step and get back into the top four in Serie A in order to secure a return to the Champions League next season.